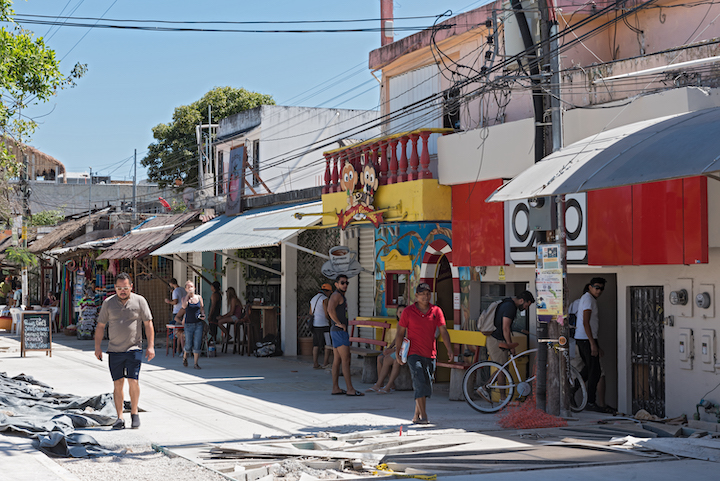 From its earliest days, Mexico has always had an identity crisis. Mexicans have continually asked what it means to be Mexican, and it seems that every time they come close to an answer, another cultural or political revolution asks the question all over again. Americans, on the other hand, seem to have a solid grasp of who they are. They are the free, the brave, the independent. They have built their nation with this identity at its foundation. Meanwhile, Mexicans seem to have been more preoccupied with what they are not rather than what they are. Nobel Prize winner Octavio Paz wrote:

“The Mexican does not want to be either an Indian or a Spaniard. Nor does he want to be descended from them. He denies them. And he does not affirm himself as a mixture, but rather as an abstraction: he is a man.”

In the middle of this philosophical puddle, you can clearly see how easy it is for Mexicans to say what they are not. At the same time, you can see the Mexican’s desire to be only Mexican, despite having such a mixed background. Behind nearly every political, religious, and individual decision, Mexico has first had to decide whether to deny or embrace their Spanish or Indian heritage before being able to find its identity.

It is difficult to pinpoint when Mexico found its political identity. In pre-Hispanic times, Mexico had a very rich history of hundreds of tribes and millions of people. The Aztecs functioned as the central authority to whom several smaller tribes paid tribute for protection without ever fully giving up their autonomy. After the Spanish conquest, these tribes were thrown together to live as slaves to work for their Spanish masters. In 1821, Mexico gained its independence, but it was unable to achieve a fair democracy. Although there was a central government in Mexico City, the land was still divided up between caciques, or local leaders, who played “a role similar to that of city-state rulers of the Aztec Empire.” Mexico soon saw that mixing the Aztec and Spanish way of life was not sustainable, and in 1910, the people began the Mexican Revolution to transform their government. But even after the Revolution, the Mexican government functioned off of a very powerful central figure who appointed his successor, reminiscent of an Aztec emperor’s leadership. In the last couple decades, Mexico has found a more balanced democracy and has elected leaders from different parties. Even the name of the National Regeneration Movement, which is the current party in power, still points to the ongoing search for Mexican identity in politics.

Perhaps the most significant instance of mixing Spanish and Indian heritage can be seen in the Virgin of Guadalupe. The Catholic missionaries had been struggling to convert the Indian population to leave their pagan religions and believe in a Western god. The concept was too foreign to hold any meaning for the Indians. Although forced conversion to Catholicism did occur for a while, a personal acceptance of Catholicism only came by blending the two religions. According to the story, the Virgin of Guadalupe appeared to an Indian named Juan Diego in 1513. Their encounter was very close to the sanctuary of Tonantzin, an Indian goddess. Not by coincidence, Catholic churches have since been built close to Indian sacred grounds. In Cholula, for example, the Church of Our Lady of Remedies is built on top of the world’s largest pyramid, which had a huge spiritual significance during its time. Through the Virgin of Guadalupe, Mexicans have been able to take both an Indian and Spanish religion and create something that is uniquely Mexican.

While the question of Mexican identity has been asked by political and religious institutions, it is at its root a personal question. All Mexicans must ask and attempt to answer it for themselves. A knee-jerk answer might be that to be Mexican is to be mestizo or mixed because the majority of Mexicans have a mixed heritage. The term embraces both the Old World and New World ancestors, but it falls short of defining a Mexican for two reasons: first, because not all Mexicans have mixed blood; and second, because an ethnic makeup is not the same as an identity. Language is not enough, either. The Mexican government recognizes 68 national languages, from which there are hundreds of dialects. A way of life, besides being vague, would be lacking as well. Mexico is simultaneously home to one of the world’s largest cities and to some of the world’s most remote tribes. The question then falls on the individual.

After finding all these ways that don’t define the Mexican identity, you might be feeling empty and unsatisfied. This would actually seem to be the closest we can get to the answer. The last part of Octavio Paz’s quote ends with a similar feeling: “He becomes the son of Nothingness. His beginnings are in his own self.” Octavio Paz is implying that only the individual Mexican can answer the question of his own identity. Throughout Mexico’s history, the individual’s answer has shaped his politics, his religion, and himself. In the meantime, it might be better to begin by understanding Mexicans are not, before attempting to define what they are.